We all know that cloud environments are different than on premises. Development environments can be even more difficult, the right cross between giving freedom to produce business value and enough security and controls to maintain a good security posture. Recently I came across a scenario where the design was that the networking components (Virtual Network, S2S VPN, Peerings, Service Endpoints, UDRs, Subnets, etc.) were all under the control of a Networking team so that the Azure environment would be an extension of their local network. From a permissions standpoint though this caused some problems. The goal would be to empower developers to build whatever they need and just attach it to the vNet when connectivity was needed, with the caveat that they shouldn’t be able to modify any of the network settings or configurations in the shared vNet. This however, turned out not to be possible with default IAM roles.

In my testing, even though you’re not “modifying” anything per se in the vNet – when attaching a network interface card to a Subnet it does require write access. Reader access will give the user this error.

After looking through the default IAM roles, there aren’t any that do what I need them to do. Alas, a custom role is needed. For reference, please checkout this docs page for custom roles – https://docs.microsoft.com/en-us/azure/role-based-access-control/custom-roles.

First, I need to see what actions are available to pack into the custom role so I run the following command in Azure Powershell and get these results.

Great, now I can see what is available. It looks like the actions that I need are the /subnet/join/action and /subnet/joinViaServiceEndpoint/Action. Based on the descriptions these two will essentially give “operator” role to the vnet. The assignee will be able to use the subnet(s) but not able to modify them.

Next, you can use one of the template references in the Microsoft Docs link (https://docs.microsoft.com/en-us/azure/role-based-access-control/custom-roles-powershell#create-a-custom-role-with-json-template) and modify the actions.

After modifying the assignable subscription IDs, save that as a .json file and use it in the following command to import the custom role.

After a portal refresh you get the custom role available as an IAM role assignment. 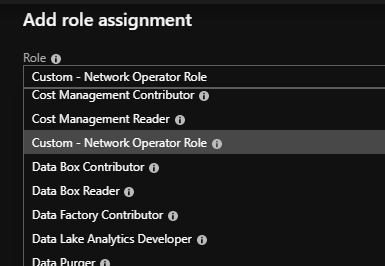 There you go, after assigning this role the user was able to create VMs and attach them to the Virtual Network while still leaving control of the Network configuration to the Networking Team.

I hope I’ve made your day at least a little bit easier!